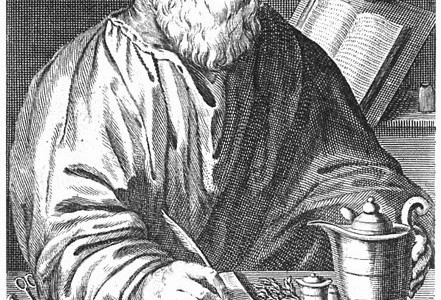 Hippocrates was one of the first people in the world to consider that disease was caused by something other than divine, which was a great deviation from thought held for thousands of years. Because of his breakthroughs in medical diagnosis, medical study and his lectures, the discipline of medicine has grown considerably. To the extent that the Hippocratic Oath is still spoken by the majority of medical schools in North America, some in Latin.

All of his works were collected into a great volume known as the Hippocratic Corpus, which is widely believed to be one of the only surviving works from the Library of Alexandria.

Inside, one can find a variety of writing styles and marks indicating that the manual was assembled over the course of time, not in one setting. It’s quite likely that as many as nineteen people helped to write this gargantuan work. The Corpus introduces several medical theories and ideologies popular during the time of Hippocrates, but it’s clear that its emphasis is on his work.

It contains entire textbooks written by Hippocrates, lecture notes from his top students, research on case studies, philosophical essays about medicine and medical practice, and various topics related to medicine and the discipline. All of this information is compiled in no particular order, so scholars took a great deal of time deciphering it in order to understand its implications.

Hippocrates didn’t get everything right, but what he did show medical academics was how to apply logic to a patient’s diagnosis. He also helped create the ideas, and possibly wrote the Hippocratic Oath. This Oath was once akin to law, and doctors could lose their entire practices for violating it.

About the Author: Samuel Phineas Upham is an investor at a family office/ hedgefund, where he focuses on special situation illiquid investing. Before this position, Phin Upham was working at Morgan Stanley in the Media and Telecom group. You may contact Phin on his Samuel Phineas Upham website or LinkedIn.